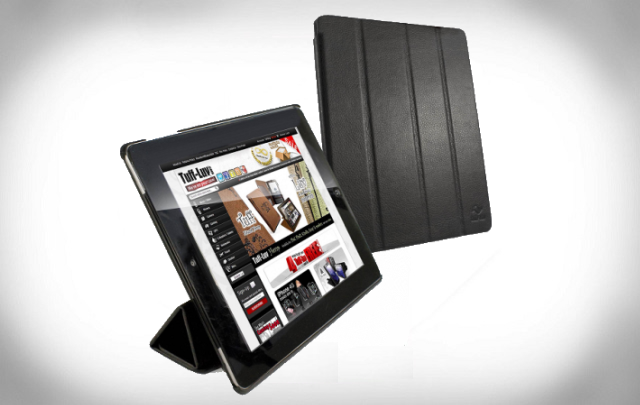 The Tuff Luv Smarter Cover is an attempt to improve what Apple’s smart cover does so well, but does it succeed?

The Smarter Cover is made completely from leather, with the exception of some rubber coating on the inside to help keep the iPad in place. The entire case feels very nice. It’s easy to hold on to and looks professional, which compared to the actual smart cover is a big improvement. The case is very thing which was a big surprise, it’s definitely the thinnest leather case I’ve ever used on my iPad.

The Smarter Cover holds the iPad in place by four clips, one in each corner. I’m never a fan of cases which affect the way I can hold my tablet, but the clips are very small and are barely  noticeable. That said, I still prefer having no clips such as the one in the Case Mate Tuxedo.

The inside of the case is very nice. While the inside side of the lid attracts a lot of dust, it’s very soft and you can be guaranteed it will keep your iPad safe from small scratches on the screen. As with any smart cover, this case folds into a stand for viewing and for typing. Both the positions are very strongly built and are easy to fold into.

The lid on the case is a separate piece of leather stitched to the base which means that it is very loose. At first I thought that this was a very good thing as it made the case extremely easy to fold over, however it has a downside. It really makes the lid too loose so that it is constantly turning the screen on and off when you carry it. This can be quite frustrating as it means that you never really know how long your battery is going to last. Another extremely odd thing I found about the case is that when the case was folded over, the smart cover functionality would activate from the other side of the case, turning the screen on and off.  It’s the first time this has happened to me on a smart cover case, I guess the reason is that it is so incredibly thin.

The Tuff Luv Smarter Cover has its fair share of good and bad. The material feels very nice compared to others available for the same price. The lid is loose which means it takes no effort to fold it over to the iPad. Most of the time this is a really nice feature but it gradually gets quite frustrating as never secures itself to the tablet. The case looks incredible and it’s a joy to have on the iPad, however a few small problems affect this case from being something special.