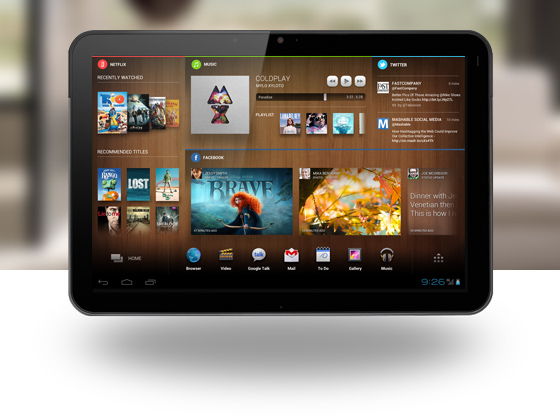 Say hello to Chameleon, a user interface proposal for Android tablets which hopes to change the way you interact with the Android operating system.

The aim of Chameleon is to optimize the tablet’s screen so that you can get the most out of the large screen. This means throwing more information and multimedia towards you than ever possible before. When I say that, you probably think I am talking about what widgets do so well, but i’m not. While you can get some widgets that are amazing at what they do, there aren’t many which match each other. The twitter widget might look great, but it doesn’t match the Facebook or clock widget, meaning it makes your homescreen look very messy.

This is what Chameleon hopes to change. The entire user interface is built up of a number of different widgets which work together to make a tidy and easy to customize homescreen. The entire project is based around the ability to do things faster, easier and make things more enjoyable. I’d say by the looks of the early glimpse we have, they are set to do this.

The good news is that Chameleon isn’t out of your reach, it’s not a crazy concept! While the developers were in talks with manufacturers to make tablets running the OS, talks seem to have failed. But that’s good, as the company have decided that they will released the entire operating system as an application available from the Google Play Store.

In order to do this, they will need help. A Kickstarter page has been set up to raise $50,000 in the next 28 days. So far the project has raised around $6000 in just a couple of days and is rapidly approaching it’s goal. However any additional contributions would help the application’s development to be smoother and fund later updates.