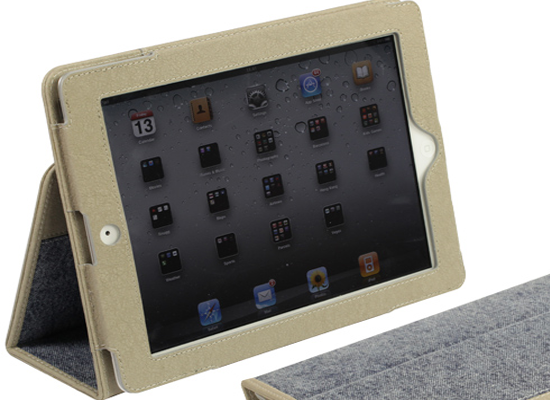 The Snugg Blue Denim is a case designed for the iPad 2. It offers a very premium design with a lot of security to keep your tablet safe. But at £34.99, are their better options?

The case can be thought of as a tougher version of Apple’s Smart Cover, which offers the close to sleep feature but next to no protection. The Snugg case offers this same feature, but with the same protection as some of the most high-end leather cases. It protects the front, back and sides of the iPad very well, while giving you access to each of the single ports on the edges of the tablet.

Now for the design. I’m reviewing the Blue Denim version, however you can get the same case in other colours on Snugg’s website. The cover protecting the screen isn’t like most smart cover cases we have seen. Rather than being made up of three of four sections to fold easily, it’s only made up of 2. At first, I really didn’t like this. It seemed like it could only make it harder to fold over and this might be part of the reason why the iPad doesn’t sleep every time you close it. However, by only being made up of two sections, the stand created when folding the case up is extremely sturdy, much more so than Apple’s official Smart Cover, or other cases that I have reviewed recently.

The overall feel of the case is nice, and very easy to grip. However, i’m not a big fan of denim on cases, as I feel that it makes the iPad look a bit cheap. However that’s just my opinion, and as it’s available in other colours anyway, I wouldn’t take that into account when deciding whether to purchase it or not. The case obviously adds a significant amount of thickness to the tablet, however when you take into consideration how much protection the case is offering, it’s really surprising that it’s not any thicker.

Overall, the Snugg Case for iPad is a very, very nice case. It looks good for the most part, and is very easy to hold. It’s a shame that the close-to-sleep feature hasn’t been perfected, as that’s really the only downside of this case.

So, is it worth the £34.99? Yes. It’s made out of very high quality material and offers enough protection to secure your iPad against most bumps and scrapes. For the price, you won’t find much better.

Following my opinions of the less-than-perfect smart cover functionality of the Snugg Denim case. Snugg sent me a replacement case as they were confident that the issue was a one-off fault. I can confirm that after playing with the replacement for a few days, it works a lot better than the original case they sent me. I am therefore changing my overall score from from 3.5 to 4.5.