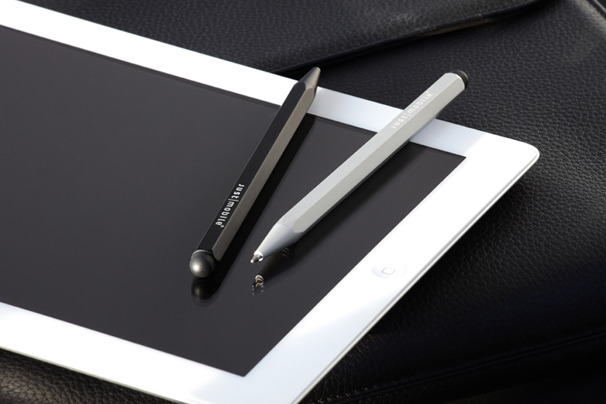 The AlluPen Pro by Just Mobile is just about as fancy as a stylus can get. But with a price tag which exceeds just about every stylus I’ve every seen, it begs the question “Is it worth it?”.

Well, first off the design. It’s made with a very solid aluminium, which is the only material used on the outer casing. It’s heavy, but feels great. Most styluses I have seen are made out of plastic, which although may be okay for a while, are bound to break, crack or just look nasty. There isn’t much hope of that with the AlluPen Pro, as it’s excellent design means it’s going to last you a very long time.

The stylus comes packed with a refillable ballpoint pen in one end. It’s a nice touch, and one that means you won’t feel entirely silly carrying a stylus around with you. But it’s a feature which I think may have bunked the price up a couple of pounds, and one that’s not entirely necessary.

Now for usability..it’s awesome. I’m not an artist, in fact I’m far from it. But the stylus really made drawing on my iPad a delight. It replicated how I would draw on paper brilliantly, unfortunately reminding myself that I’m really poor at art. The rubber tip which is used to write and draw works well, just as expected. It also comes with a replacement nib, I’m not sure how you would break a stylus tip, but it’s nice to know you have a replacement if it ever does happen.

Now, onto one thing which will be driving people to styluses at the moment is the hugely popular Draw Something. Unfortunately, you don’t need a stylus for this app. It only has basic tools which can be utilised just fine with your finger. That said, If you feel more comfortable with a pen, then you can find cheaper more suitable styluses on MobileFun with the link at the bottom. However ‘Paper’ is another massively popular application which actually does require a stylus. Finger is fine, but to really get the best out of a wonderfully artistic app like ‘Paper’, you are going to need a stylus.

When I asked MobileFun to send me this stylus to review, I was very sceptical. I would never have though for a second that I would love it as much as I do. I use it every day, and even though I know it’s going to be no good, I open Paper and do little sketches. To tell you to buy this stylus would completely depend on what reason you want one for. Like I mentioned above, If you need one for Draw Something, then get a cheaper one made of less quality materials. However, if you are someone who is confident in your ability to draw, then I highly recommend this. You are paying for high quality materials, but it makes it so much more of a joy to use than a plastic one.