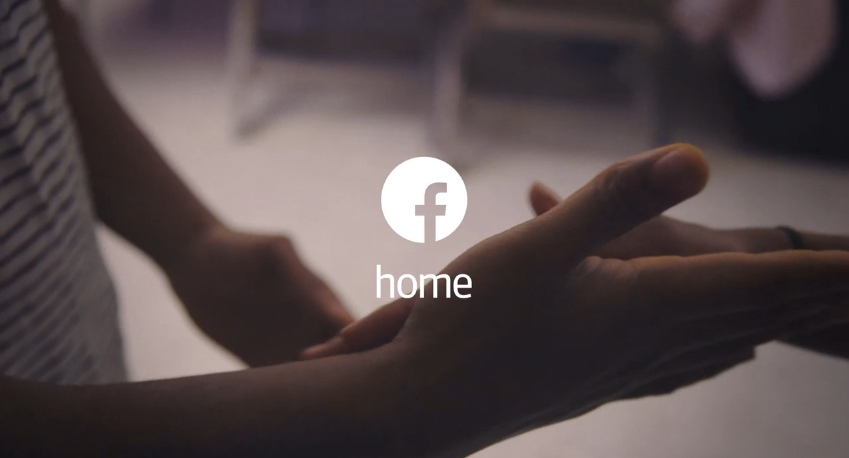 Last week Facebook finally launched their new android Launcher, Facebook home. Available at the moment only on a handful of devices, Facebook have promised that it will grow its compatibility over the coming months. Facebook home was eagerly anticipated, although many questioned why anyone would want facebook to be more than just an app. Now launched and available to download, are these beliefs ratified?

After installing Facebook Home and making it the default launcher, android is skinned with what is an extremely basic, but very sleek facebook design. Your home page, where on android you had a clock and a variety of apps basically becomes a news feed. The page is filled with a status, and behind it the cover photo of the person posting the status. Swipe to the left and a different friend’s status will be displayed, again with their cover photo as the wallpaper. Its a unique design and something that at times looks extremely pretty, although if you have friends that don’t have hi-res cover photos, the result is somewhat diminished. At the bottom of each page you have the option to like or comment on the post you are viewing, without having to open the facebook app. Like I say, as long as your friends all have beautiful facebook profile pictures, the result is very impressive, but we all have friends that clutter your timeline with rubbish posts and silly images- unfortunately these irritating posts are now full screen annoyances.

That’s pretty much it as far as the home page is concerned. Statuses and background images load with lightning speed so you can swipe through until your hearts content. I found myself often swiping through pages and pages of posts, highlighting that facebook’s addictive quality is definitely present.

At the bottom of the homepage is a small circle. Tap it and you are presented with three options – recent apps, messenger and the app drawer. To me it seems odd that Facebook a social sphere becoming ever more picture oriented decided not to include some sort of camera shortcut somewhere, but Facebook have said that Home will be regularly updated, so I guess that may come soon. Tapping on the app drawer will bring up a scrollable page of your apps, not too dissimilar to regular android, and tapping ‘more’ will take you away from Facebook home and back to stock android.

The whole thing is perhaps too simplistic. There’s no way to use folders or widgets and whilst I appreciate Facebook were trying to keep things simple, I feel that anyone currently owning a smart phone would appreciate a few more features.

Where Home really excels is through the new messenger service. With Facebook messenger it is now possible to group Facebook messages and SMS messages together, meaning it is now possible to use Facebook as your default messaging service. That’s pretty cool. And what’s more it works really well using Facebook’s new chat heads system. Basically when someone messages you, a bubble containing their profile picture appear on the screen. It’s a pop up that appears above whatever you’re looking at so you don’t have to exit any application to check texts. The ‘chat head’ can be dragged around the page and hidden by swiping the icon to the bottom of the screen. It’s a really neat new way of viewing messages and in my view is definitely the most impressive part of Home. Android’s notification bar has always been effective, but this new method of messaging feels even more intuitive. The Chat Heads service is currently available to anyone – even if you don’t have Facebook home. Simply download Facebook messenger and in the settings make it your default SMS service and you’re done.

So far Facebook home seems pretty impressive as a whole. The Home screens are often beautiful and definitely captured the addictive nature of other Facebook formats.  ‘Chat Heads’ is genuinely brilliant and I can see myself using it as my default messenger service as it’s a prettier and more practical alternative. With Facebook Home installed, your smart phone becomes Facebook foremost,with other additional services hidden beneath. If you use Facebook heavily, this might be perfect – however some will find it too Facebook oriented, and I feel that many, as with myself, will prefer to keep Facebook hidden within an app, rather than allowing it to spill over into the rest of the phone.